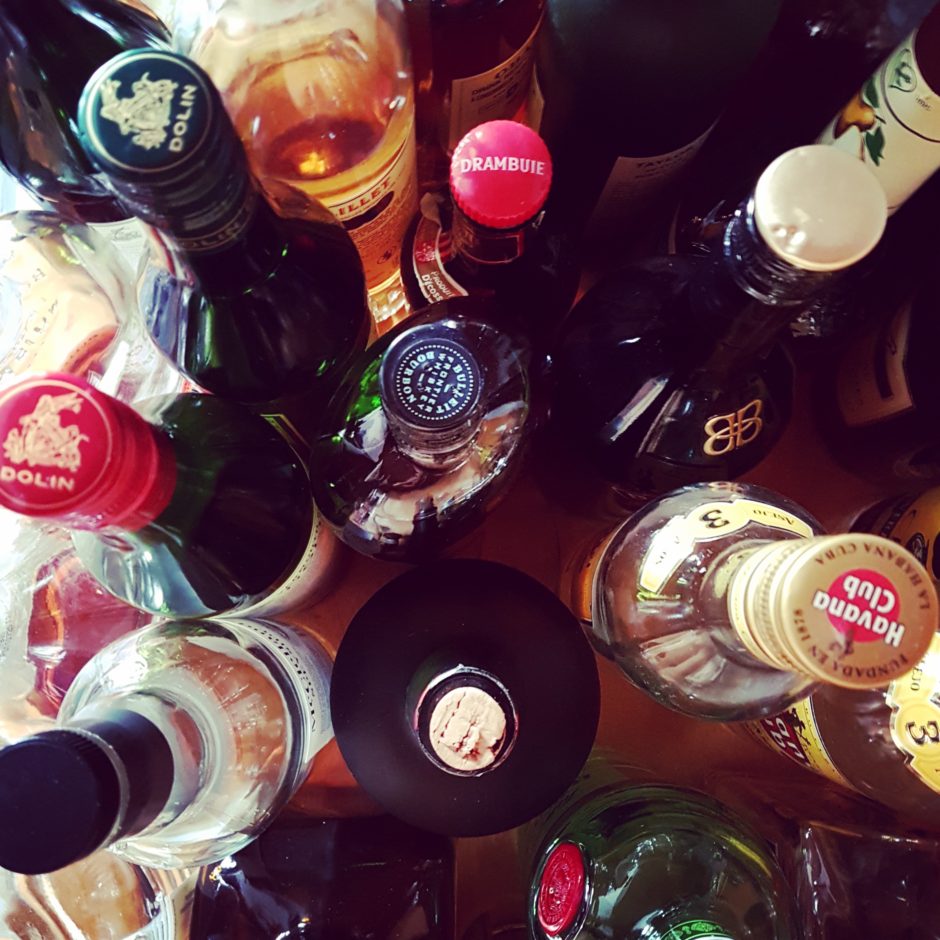 The Cruise Ship Director.  She (usually she) has a roster of potential drunk activity ideas: karaoke, charades, a tapas crawl, line dancing, strip Twister.  She is known for saying things like “guys, guys, c’mon guys” and “this is going to be so much FUN”.  She pretends to be drunker than she is so that she can stay relentlessly peppy, but can often be found weeping at the end of the night because no one wanted to go drunk Christmas carolling – in July.

The Laugher.  He or she (it’s pretty much split) finds everything hilarious.  Genuinely funny stuff is hysterical, sure, but this drunk laughs when people fall down stairs or start house fires.  If a woman, she has a fantastically annoying laugh that feels like your brain is rubbing up against a cheese grater.  Her laugh is the sound a donkey would make if you force fed it crushed glass.  If a guy, his laugh is symphonic: sometimes a woeful oboe, sometimes a rumbly tuba, sometimes a skittering flute.  His laughter is usually accompanied by aggressive foot stomping and unsyncopated hand clapping that is so loud you can’t hear the punchlines of jokes.

The Bore.  His or her natural habitat is the unfuckables table at a wedding.  She drones on about her miniature spoon collection or wants to share her cupcake artistry Instagram feed.  He can tell you everything you never needed to know about eaves troughs or the Star Wars franchise.  If you have the misfortune to be seated next to one of these people, you can either puncture your eardrums with that Pinterest-worthy butter knife or just keep slurping the cheap ass plonk until you pass out.

The Professional.  This guy (it’s almost always a man) has a mindboggling capacity for alcohol.  The two cocktail work lunch may be inadvisable nowadays, but the four Grey Goose martini dinner, including wine and postprandial cognac, is just the beginning for him.  He may get loud, but he’s never a boor.  Usually a bloated bear of a man, when he shakes your hand he splinters every bone in your fingers, and if he claps you on the back with his big beefy hand he can knock you to the floor.  When he saunters out after dinner he is measured and only very slightly wobbly.  And he never seems to visit the bathroom.  What a champ!

The Pontificator.  Sit beside this gal when you want to learn everything there is to know about the post-Marxist feminism, which is potentially more interesting than the guy who blathers on about his doctoral thesis on the shoe fetish of the Danubian monarchy.  Either way, you will not get a word in edgewise.  Eventually, the Pontificator will get so drunk that you won’t be sure if they are still using ten syllable words or if everything they say is just slurring together into one big word.  One good thing about the Pontificator is that he or she is so self-involved that they probably won’t notice when you slink off to the bar for a refill.

The Sloppy Slapper.  Usually a woman in a too-tight dress and too-high heels but can also be a guy with a carpet of chest hair (and neck hair and back hair) in too-tight pants and too-shiny shoes.  This is the complete stranger, or friend of a friend of a friend, who grinds up on you on the dance floor.  If you encourage them even a little bit – and this encouragement could amount to just not punching them in the throat and walking away, all because your favourite song happens to be playing at the moment and you want to dance – they will eventually lean in to kiss you from three feet away with their tongue already out of their saliva-slicked mouth.  When you turn away in disgust they will slobber your earlobe and not even notice, whereupon you will immediately repair to the bathroom and apply the contents of your travel-sized hand sanitizer to the affected area.  When you get back to the dance floor her dress will be hiked up even higher and he will have undone another button on his shirt.  You then try to steer them towards each other because your second favourite song is playing and you want to dance in peace.

The Lunatic.  This character is almost always a guy.  He is sober enough to still be ambulatory but drunk enough to come up with some dumb ass plans.  “Let’s steal this skidoo!”  “Let’s toboggan down the stairs in a roasting pan!”  “Let’s rob the all-night laundry using a bar of soap carved into a gun!”  “Let’s pretend we only speak Russian!”  “Let’s poop on this car!”  Strangely, no matter how drunk and stupid this person gets, they always show up for work the next day.

The Life of the Party.  Every office holiday drink up has one of these.  Maybe it’s the Portuguese coffee lady who can sing to make the angels weep.  Or the mailroom guy with the incredible drunk stand-up routine that would make Louis C.K. jealous.  Or the help desk geek who’s got the moves like Jagger.  It always seems to be the person you least expect who can captivate the party crowd with their drunken talents.  That’s what makes them so awesome.

The Fighter.  Always a guy.  Always steroidally and unnaturally jacked.  Always on the lookout for a punch up because someone bumped into him, or looked at him funny, or looked at his girlfriend funny, or looks funny period.  Anything and everything can set this guy off.  He uses his fists and not his words because the ‘roids give him a high-pitched, girly voice.  Steer clear, try to keep your eyes closed and try not to look funny.

The Creeper.  Might be your great-aunt after too many Pink Lady cocktails.  Could be your brother-in-law after a few too many brews at the family reunion.  He or she will say something mind-blowingly racist, homophobic, sexist or pervy.  You might be hammered too, but you know enough to get out of there pronto.  Except when the creeper is your boss, or your spouse’s boss.  Then you’re screwed.

The Caregiver.  Always a woman.  She is irritatingly solicitous: worried about whether you have over imbibed and wondering how you’re going to get home.  She will hold your hair back when you vom, call you a cab and telephone the next day to make sure you’re ok.  Every party needs a caregiver, even if it means you have to look at photos of her cat dressed up in various homemade Disney princess costumes.

The DJ.  This always happens to me.  I make a Spotify playlist of music that I like.  Music that I think other people will like.  Music that I figure is appropriate for the crowd and the event.  And then some lush hijacks my iPad and starts DJing like a drunken dementor.  Blues, alt-blues, jazz, alt-jazz, hip hop, alt-hip hop, and then something totally random and even more out there just for lolz, and then finally the latest bootleg of the latest band I have never heard of.  It wouldn’t be so bad except they never, ever let a song finish.

The Loser.  Ugh. The worst.  The Loser is a mashup of all the awful kinds of drunks.  He (almost always a man) is a belligerent, unfunny, creepy, tedious, overbearing guy who thinks he is a combo of all the best kinds of drunks.  He genuinely believes that he is entertaining, funny, smart, magnetic and talented.  But mostly he thinks he’s funny.  Like hilariously funny.  He thinks he is hilariously, drunkenly, funny when he is just sadly, drunkenly, gross.

I’ve seen all these kinds of drunks, and more.  Fortunately, most of them don’t come to my restaurant, or maybe we just cut them off before they get that far gone.  But there was a big time Loser at the restaurant last week.  Loser had actually been in before, with his wife, and they had both been quite pleasant as I recall.  This time, Loser and his buddy came in for a late dinner after most of our customers were preparing to leave.  I knew that they had been up to something: they were a little too glassy-eyed, a little too boisterous.  It’s possible that they had just come from a church basement charity basketball game and were a bit wobbly from exertion and dogoodness.  Or maybe they had been bending elbows before they arrived, or maybe they smoked a doob on the way over, I don’t know. (One of my former chefs was fantastically skilled at figuring out what mommy’s helper people were on.  Juice, dope, smack, coke, molly, oxy, crank; she could spot a user a mile away, which was super helpful when we were conducting job interviews.  And you wouldn’t believe how many people attend interviews for restaurant jobs when they’re completely cracked out.)

So Loser and friend order a couple of glasses of wine and their dinner.  Fortunately the restaurant is mostly empty at this point so I am the only person in range of their loud conversation.  As a mother, I have highly developed skills in ignoring loud, whiny, weepy, bad-tempered, disruptive behaviour.  With three kids, I had to learn how to sleep through that shit.  But my ears perk up when I hear the swearing.  Believe me, my vocabulary in that regard is gold medal calibre.  I could swear for Canada at the Olympics.  But I don’t usually hear that kind of language in the restaurant.  “This is the best fucking steak I’ve ever had.”  That sort of thing.  I wasn’t too fussed about it because, frankly, it is the best fucking steak he has ever had.  Besides, no one else could hear them but me.

After the server clears their plates, Loser declines dessert or coffee and asks for the cheque.  Thank God.  I won’t have to tell them they won’t be served any more alcohol.  As I am processing his credit card, Loser says “I’m gonna bring my wife for dinner next time”.  And I say, “well that would be lovely.  It would be nice to see your wife again.”  Then Loser says, “yeah, the last time we were here for dinner I fucked her in the bathroom.”  “Excuse me?” I say, because I am certain that he didn’t just say what I think he just said.  “Yeah, I fucked my wife in your bathroom.”

You know, TripAdvisor, Yelp and whatnot have had a terrible chilling effect on restaurateur behaviour.  We are very afraid to say anything in defence of our employees or our restaurant for fear that someone will post a negative review.  So we suck up the insults, and comp drinks or dinners, to forestall bad press.  But I wasn’t going to have it this time.  I have a sense of humour.  I can be as ribald as the next person.  But this was just too much.  So I said, “you’re disgusting.”  “What?” he said.  “You’re disgusting.  I can virtually guarantee that no woman, even your wife, wants to fuck you.  Never mind in a public place.  Never mind in a TOILET!  How can you say such a disrespecful thing about your wife?  To a stranger!  And I can’t believe that you have so little respect for me that you would even contemplate saying something like that.  You are disgusting.”  And then he laughs and says he’s just joking.  This is funny?  THIS is funny?  What part of this, any of this, is funny?  Hey Loser, next time you come for dinner, don’t bring your wife.  Just visit the washroom alone and go fuck yourself.

The Best Seat in the House: a Restaurateur’s Rant