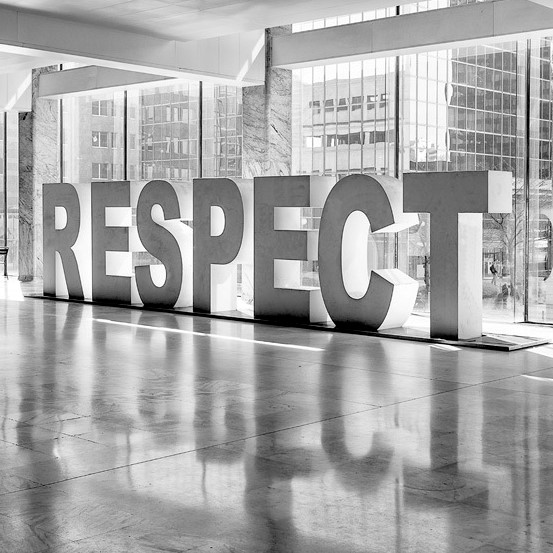 I was in the dairy section at the grocery store, contemplating the yogurt selection.  Nearby, a store employee stocked ice cream in the freezer, in the desultory fashion of a teenager dragged out of bed before noon on a weekend.  A young man turned into the aisle and approached the employee.  I didn’t hear their conversation, but I assume the young man asked where he might find shampoo or cornflakes or kitty litter or whatever.  The employee evidently offered a suggestion, and then pointed and waved in a vague way to another part of the store.  As the young man passed me, he called over his shoulder to the employee “Respect”, and then rounded the aisle and disappeared.

Not “thank you” or “thanks”.  “Respect”.  I found this a very curious response; as random a word choice in this situation, it seemed to me, as ‘lemur’ or ‘teapot’ might have been.  Why would someone say “respect” instead of “thanks”?  Laziness?  Ignorance?  Bad manners?  Perhaps it was just this one guy, or just this one time, or maybe I’m the one who is completely out of step.  I don’t know why, but the word ‘respect’ stuck with me all day.  It just kind of bugged me, this not saying “thank you”, when it seemed to me to be the only appropriate response to another’s assistance, however trivial or brief.

Later that same afternoon, my 17-year old son returned home from school, announcing his arrival with a “hi mom” holler, followed by the thunk of a heavy knapsack on the tiled hall floor.  I came downstairs a few moments later, navigated the pile of shoes, coat and knapsack in the middle of the floor, and found my son in front of the refrigerator, its doors flung open, contemplating his after school snack.

“I thought you went shopping today?” he said.

“But you didn’t get anything good!” he said.

I had narrowly escaped spending $200 on weekly groceries but had somehow failed to find anything of interest to the appetite of a voracious and discerning teenage boy.

“How was your day?”  I ask, completely expecting the usual evasive and uninformative “fine” in response.  Today he surprises me.

“This teacher was a jerk to me at lunch”, he said.  My maternal hackles bristle.

“Well, a bunch of us are sitting on the floor at the lockers and a teacher – she’s not even one of my teachers – comes over and tells me to throw away a piece of garbage that’s on the floor.”

“Well, it wasn’t even my garbage!”

“But then, a couple of minutes later, she comes by and tells me to throw out another piece of garbage someone dropped on the floor.”

“I told her it wasn’t mine.  And then she went nuts; she goes into this big lecture about responsibility and taking care of the planet is everyone’s job and I am responsible for my peers’ actions, blah blah blah.”

“Well, it IS everyone’s job to take care of the planet and you should take responsibility, to a certain extent, for the actions of your friends.”

So then I told my son about my experience at the grocery store that morning.  In my effort to tie these two events together, I discovered that my feelings about ‘respect’ had been quietly marinating all day.

I told him that while I believe he owed the teacher respect, I didn’t think she was required to respect him right back.  ‘Respect’, I explained, is something that is due to certain people or certain classes of people like, for example: your parents, your friends’ parents, teachers, police officers, religious leaders and so on.  People who perform a function for the good of society.  I explained that, in my view, respect is earned, not demanded or simply expected.  I told my son that I thought he was confusing ‘respect’ and ‘civility’.  “Perhaps the teacher was not civil when she spoke to you, but I don’t think that she is obligated to respect you.”

And that’s when I realized what had irritated me about the young man at the grocery store saying “respect” instead of “thank you”.  While acknowledging the assistance of the employee was civil, using the word ‘respect’ rather than ‘thanks’ was not.  ‘Respect’ is an inappropriate word to use in order to convey gratitude, and inappropriate language can never be civil.  ‘Respect’ and ‘thanks’ are not synonyms, but are two two different words for a reason: because they mean different things.  It diminishes the meaning and significance of both words when they are used interchangeably.  Ironically, saying “respect”, instead of “thanks”, is disrespectful.

As time goes on, and I post more rants, you will come to see civility as a recurring theme.  I am obsessed.  I don’t presume that a complete stranger will respect me, but I do expect that stranger to be civil.

Listen to this playlist from The White Buffalo and make some bbq pork baby back ribs.