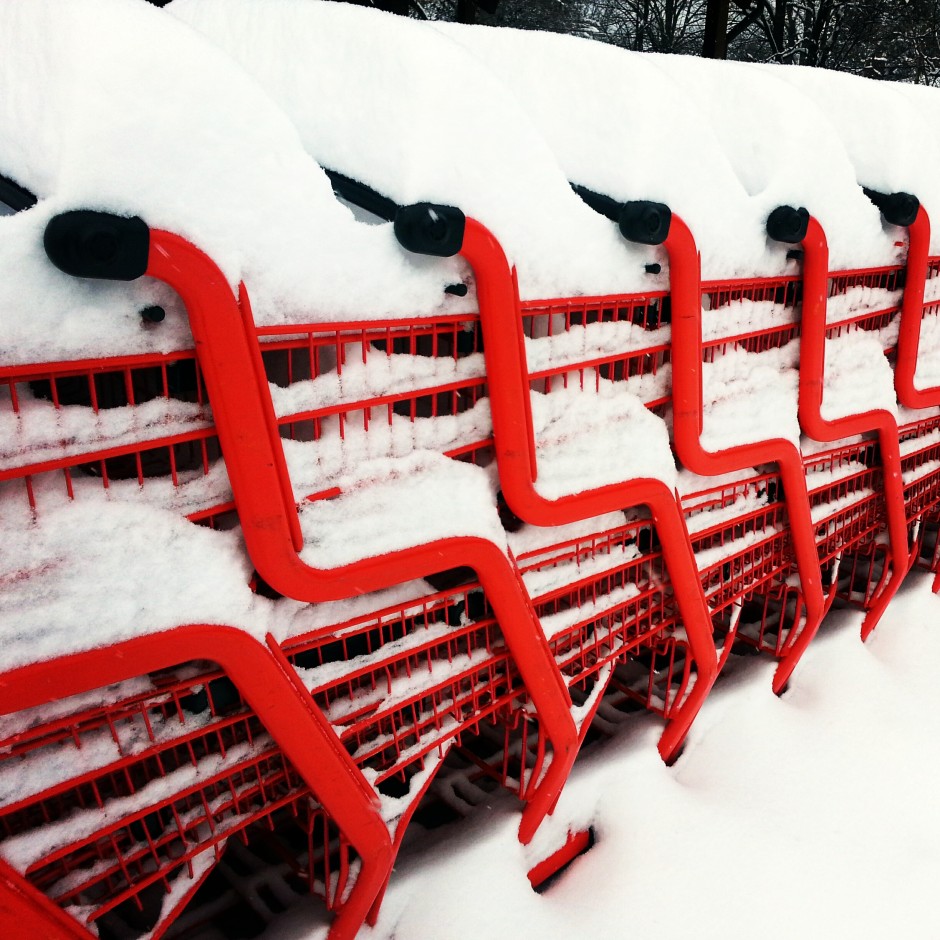 My youngest son has early morning choir practice every Thursday before school.  I often drive him there, usually because he has slept in and is running late, but also because it means he has to be grateful and maybe even acknowledge me for a moment.  I probably didn’t get home from work much before midnight the night before, but I am reliably up at 7 a.m. for the drive and the quiet togetherness.  It’s probably a stretch to think of this time as “togetherness” since he is usually plugged into his phone, simultaneously texting and listening to music.  I take what I can get.

The main reason, however, that I get up early on Thursday mornings is to do my weekly grocery shopping in peace, quiet and relative solitude.  When I get to the market after dropping off my son at choir, the conveniently close-to-the-door parking spots are plentiful.  Similarly, the store itself is cavernously vacant; just the occasional stock boy, a few cashiers and hardly any other shoppers.  That’s the best part – grocery cart-wielding numbskulls drive me crazy.  At almost any other time of day the grocery store is teeming with frenzied moms and their squalling toddlers, slowly meandering seniors, and centre-of-the-universe, loud-talking, backpack-wielding teenagers on lunch break.  Either way, none of these people have any clue about how to push a grocery cart.

I know that most of the people at the grocery store got there by car.  I know this because I see people loading up the trunks of their vehicles with shopping bags.  I assume these people are familiar with the act of propelling a piece of machinery along a route because, well, here they are!  And I expect that these people have a passing familiarity with the basic rules of the road because they have arrived here alive.  So why does everyone forget how to drive when they are manoeuvering a cart instead of a car?  Would you stop abruptly and with no warning in the middle of the highway?  Pull a U-turn in front of oncoming traffic?  Stop your car in the centre of the road to stop and pick some flowers on the curb?  Blithely drive on the left-hand side of the road?  Bump, even gently, into a pedestrian?  Crash into another vehicle but just keep on driving?  Permit your child to fling stuff out of the window at other vehicles or passersby?  Come to a full stop, in the middle of an intersection, to read a text?  Let a traffic jam form behind you while you check your email?  If you wouldn’t drive your car recklessly, dangerously, stupidly or without regard to your own safety or that of others, why is it okay to drive your grocery cart in this manner?  Hint: it’s not.

I have long been convinced that, just like some countries have mandatory military service, everyone should be required to participate in a restaurant work term.  There are the obvious lessons that you would learn, like: civility, humility, responsibility, teamwork and maybe, with any luck, the proper way to hold a knife and fork.  But, for the purposes of this rant, you would also learn to be hospitable, solicitous and spatially aware; useful qualities for both restaurant workers and drivers.  As anyone who has worked in a restaurant knows, the restaurant environment, while seemingly mundane or innocuous, is a minefield of potential dangers: swinging doors, boiling liquids, fire, heavy machinery, puddles on the floor, broken glass, smoke, screaming hot steam, artistic personalities, sharp knives, hot equipment and even hotter tempers, all wrapped up in alcohol, hangovers, hunger and time constraints.

A good server or cook is always aware of where everyone else is.  Their “spider sense” is so well developed that the best could probably work with their eyes closed.  I don’t move without checking over my shoulder, I don’t pass someone without saying “behind” or lightly touching their shoulder.  In fact, our team is so well-rehearsed and familiar with each other that we probably don’t even need to say “hot behind” when passing someone with a pot of boiling water unless we want to be funny.  (Rude or anatomical comments never get stale in the restaurant environment.)  I am so used to doing this that I even say “behind” when I am passing someone at the grocery store.  Yes, I get a lot of strange looks, but I attribute this mostly to the fact that when I am doing my grocery shopping before 8 in the morning I am often still wearing pajamas.

You probably can’t kill someone with a grocery cart (although, Lord knows, I’ve sometimes wanted to), but has anyone ever run their grocery cart into the back of your ankle?  That fricking hurts!  What hurts more, as far as I’m concerned, is the disrespect, lack of consideration and pure selfishness with which some folks wield their grocery cart.  Maybe it’s a small thing to get upset about and it’s probably out of all proportion to give so much thought to thoughtlessness.  I suppose that’s why it’s called a “pet” peeve rather than a “rampaging wild herd of animals” peeve.

Some grocery stores have miniaturized versions of the grocery cart for little kids to use.  Next time you see a kid pushing a mini cart, watch her behaviour and pay attention.  She imagines that the grocery cart is a car: she honks a pretend horn and squeals pretend brakes.  Little kids don’t know the rules of the road, but they totally get that their little cart is a vehicle.  Watch, listen and learn.

Put on this playlist from Madeleine Peyroux and make chocolate crackle cookies.