Kids at Play: a Restaurateur’s Rant 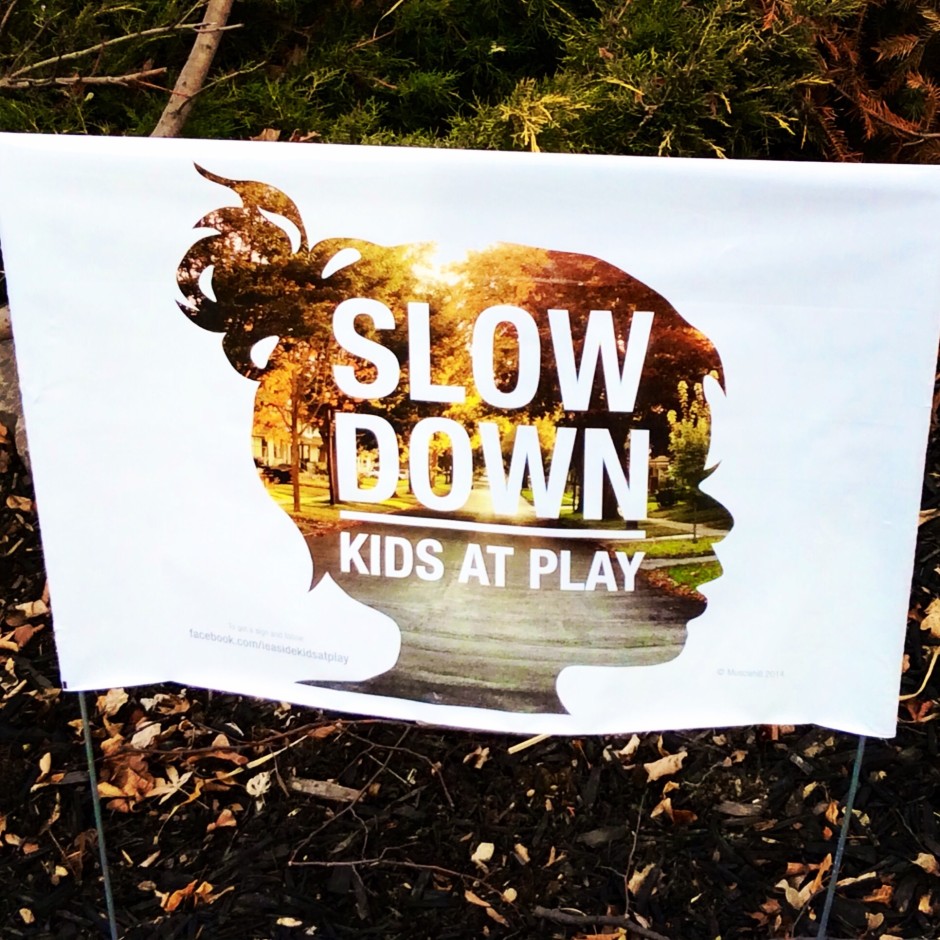 Kids at Play: a Restaurateur’s Rant

The area in front of my house consists of a public sidewalk, a driveway, a car, a tree, a stone retaining wall, some mulch, a slate walkway, a boxwood hedge, some ivy, two lilac trees, a couple of urns, some flowers and a bunch of hostas, all in an area of maybe 800 square feet.  I try to keep it tidy and attractive by shoveling snow during the winter, planting flowers in the spring, weeding during the summer and raking leaves in the fall.  Most of my neighbours are in the same boat: smallish front gardens, mostly taken up with driveways, that they similarly shovel, plant, weed and rake as required.  But even though their front yards are quite small and pretty full already, many of my neighbours also have at least one “Slow Down Kids at Play” sign.  Like something fungal or bacterial, these signs have spread like a nasty, suppurating rash across almost every landscaped front lawn on almost every leafy, suburban street.  These signs enrage me.  I think they are clutter and graffiti and, ironically, just another obstacle that obscures your little princess at play and from behind which she might suddenly lurch into the street.

I can’t understand why someone would lock their car and front door, and password protect their phone and Wi-Fi, but then announce to passing strangers that small children might be playing conveniently close by.  Similarly, I also don’t understand why some people pound election signs into their gardens, announcing their support for the red wanker or the blue one.  We have had a secret ballot in Canada for almost 150 years; why do some people undermine the significance of such a hard-won political accomplishment by publically announcing a political affiliation to their neighbours and, again, complete strangers?  Orange election sign?  Congratulations, you have a social conscience but no money.  Blue election sign?  Congratulations, you have money and you don’t plan on sharing it .  Red election sign?  Congratulations, you have a social conscience but are upwardly mobile.  I don’t know you, I don’t care and I don’t really want to know how you are going to vote.  Mercifully, election signs don’t stay up for very long; a few weeks at most.  The “Kids at Play” signs, however, look like they’re here to stay.

I remember once seeing a little child crying in a department store.  “Where’s your mom?”  I asked, figuring this kid was lost and scared and needed some assistance in finding his parents.  The poor little creature just wailed louder and shrank away from me.  As I am about to tell a store employee about the child, his mother appears and scoops him up, glaring at me and snarling, “don’t you come near my child, he’s not allowed to talk to strangers”.  How much do you want to bet that that woman has a “Kids at Play” sign on her front lawn?  Watch out for my kid, but don’t watch him.  Look where my child is going, but don’t look at her.  I think a better sign or motto for folks like that is “Having My Cake and Eating it Too”.

Many of the children that come to our restaurant are delightfully well-behaved, pleasant, courteous and charming.  These children have parents that engage their children in dinner table conversation, bring books and toys to entertain them and have high expectations for their restaurant-appropriate manners.  Not surprisingly, these parents are also themselves delightfully well-behaved, pleasant, courteous and charming.  I would wager that parents like this do not have “Kids at Play” signs on their front lawns.  And then there are the toddlers who wander barefoot around the restaurant with droopy-diapered bottoms, the young children who deliberately stuff up the toilet or the urinal with wads of toilet paper, and the sullen teenagers who text or watch videos throughout a meal, all while their parents chat about their blue election signs while expecting me to “Slow Down” when I’m carrying three bowls of hot soup because they have “Kids at Play”.

You have kids?  Congratulations, no one cares.  So you have succumbed to a biological imperative?  So what.  Billions of people have been having billions of children for millions of years before you and your special snowflake came along.  Maybe stop Instagramming what you had for lunch and watch your children, instead of asking me to do so.  Maybe put down your iPhone and take your kids to the park, instead of letting them play in the street and expecting complete strangers to babysit.  Maybe instead of going to the store to buy a “Kids at Play” sign you could push your kid on a swing at the playground.  My motto and constant refrain?  “People are stupid”.  I’m thinking of having signs made…

Put on this playlist from the amazing Rory Block, make some cheddar cheese biscuits and read this rant…

If You Can’t Stand the Heat, Get Out of the Kitchen – Part Three

If You Can’t Stand the Heat, Get Out of the Kitchen – Part Two

Teaching Kids to Cook and Eat Their Vegetables – Part Two